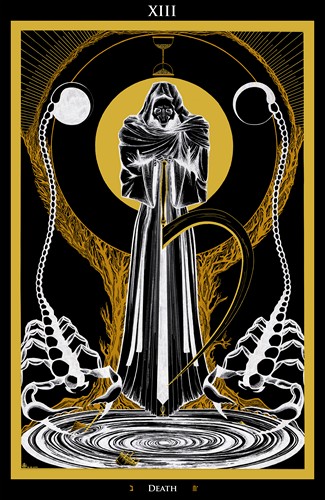 This is usually the most feared card of the whole Tarot. Every time when we think we have dealed and understood this theme of taking leave we are confronted with another aspect of this „ending principle“. Everything an everyone dies, so one cannot escape or avoid this archetype. While the other main archetypes are of varied importance in life, death awaits everyone and has to be processed – voluntarily or forced.  In a philosophical context death is the promise of time that nothing lasts forever – after all change is the only constant of the universe. In alchemy we speak of putrefaction, which represents decay and rotting. This processes generate the compounds which are necessary for rebirth and evolution.As mentioned above one corresponding symbol of death is time. The reaping hook takes the form of saturnus which not only symbolizes the great sea of our subconsciousness and the vortex of creation but also the past and all which is already dead from our point of view. In an occult context it also corresponds to the Qliphot, the husks of creation. The vortex or marsh at the base of the tree does represent a symbolical entrance into the rooting of this tree of life and knowledge. In most myths about initiation the protagonist must wander through a cave or a swamp to enter the heavily guarded underworld. Only after facing the inner demons and fear of death itself one can resurrect from this experience.A physical symbol for this ambivalent vortex would be a black hole which is not only in the centre of every galaxy but does also represent the end of all matter.  The two scorpions symbolize the dissolving principle. Their poisonous nature is representative for all the decomposing forces like mushrooms and legions like ants or bacteria which can be called the mediums of disintegration.The vortex also always represents the spiral cycles of being and reminds us that death is not only the end but does also generate the compounds which are necessary for a new beginning. Within the vortex are circling a crown, a pyramid and a wand. These symbols are manifestations of power, matter, hierarchy and physical wealth. The archetype of Death reminds us that no physical thing or social status can be taken with us in times of transformation and therefore has no metaphysical value.The skull in the foreground is a symbol for our strong fear of death and uncertainty of what comes after the farewell. The feared figure of personified death covers the awakening sun which is already arising behind the skeleton and the bare tree. This sunrise promises an awakening, even if one can never know how it will manifest itself.