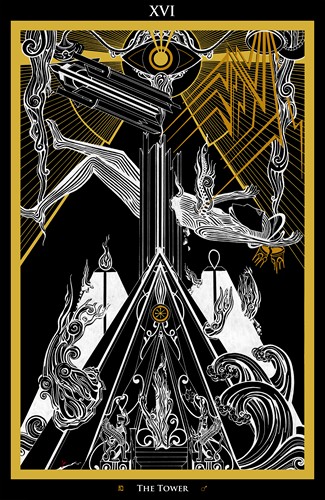 This card is all about the archetypical fall from the heavens. The tower is a symbol for a seemingly solid order with a steady base. This kind of arrangement won’t break at it’s base which makes it nearly indestructible. This means that change won’t come from within at this point but must strike from outside to break sclerotic habits and initiate the coming fall.Rigidification and congealment are dissolved abruptly. Like a strike of lightning the coming change is rarely predictable. It often is initiated through an outside force. In the upper part of the card we can see trumpets which refer to the apocalypse of Johannes and the opening of the eye which is a symbol for any sudden intervention from a higher power.The flash above strikes hard and the whole upper part of the tower is breaking off. The symbols of „Alpha“ and „Omega“ are collapsing as well.We can see a serpent marked with the symbol of Jupiter is leaving the falling person.Only through and during the act of falling an emotional encapsulation, re-interpretation and new-prioritization of values can happen.The serpent is symbolizing a foreign idea or system which has been personified. This serpent is immortal but the protagonist can escape through falling. A person who symbolically inhabits such a tower (like an archetypical Emperor) usually believes himself to be irreplaceable but instantly is replaced when leaving the certain system.The fall presents the opportunity to separate from a system or order and return to oneself again.Even if one can only feel lost in such a case the chance to pick up courage again is eventually presented. Fortunately the experience remains, which makes one able to teach others and to grow from the achieved knowledge. Only when reaching the base or ground again one is able to re-arrange one’s life to a better outcome.The letter of „pe“ refers to „the mouth“ which swallows old ideas and helps one to process the fall and rearrangement.Summarized the card of the tower is the promise that every idea as well as every empire, system or order must eventually collapse to rise again like always – remember the keyphrase „order from chaos“ in this context.The rose at the bottom represents the new growth of the rising system.Maybe it will appear in a new dress or in different and apparently purged form, but the conception will always be the same only the protagonists are different.Fortunately every fall makes it possible for a being to leave a cycle and an inflexible position. After all this card is not so bad as it’s reputation – it’s rather relief then breakdown.