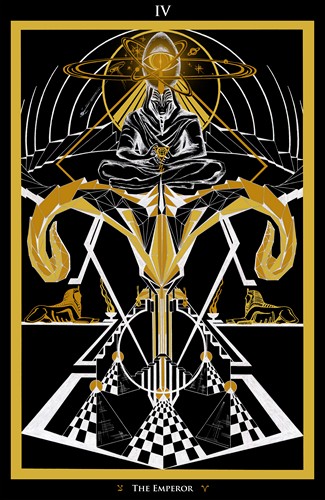 The traditional display on a throne seemed wrong to me. I chose a platform instead.  I didn’t want to represent the human idea of thrones here. This symbolism is wrong in this day and age. Beings of power hide behind veils and do not display their force in plain sight. The emperor in his basic idea is a wise king or a tyrant who keeps his empire together. The throne theme is too public. I think the card should represent an idea of distance to his people, therefore the platform.The card of the Conqueror represents the young agile form of an emperor who expands and still has a goal, a focused sight and the idea that there is more to accomplish, to conquer or to gain – pure fire.The Emperor on the other hand doesn’t focus on a bright future. He has conquered it all, is tired and old, but wise. The next step is to get eventually betrayed by someone close, traditionally by his queen, best friend, brother, son or general. There are only a few exceptions in history and literature. An old sun who is set to die soon.Compared to the Conqueror (the rising sun) there is no target for the setting sun. So the usual heavy fire symbolism just seems wrong at this point.On of the strongest motives found in this archetype is the distance, the sight directed downwards (on his empire/people) and the beginning of a frozen, aloof relationship to the world.The pyramidal hierarchy/caste system which supports the emperor still is made of fire in a functional empire but the aura of the top just isn’t red anymore. The golden days are over as well, all that remains is keeping hold of the power which is restriction for this archetype.Restriction, which means the inability to act out of own will, always increases in pyramids as you climb up their steps. Furthermore, the connection to the real people who are subjects of the empire disappears almost entirely. Another reason for ice/crystal instead of fire/fluid.The patriarchy itself encounters symbolic problems at this point.Osiris, Odin or Anu do not represent fire at all. Maybe Jehovah smashed up the cultural symbolism through his flamy behaviour, but he is practically the only one.Even Zeus just seems old and bored. His adventures on earth are not carried out as the archetype of the Emperor himself, but always in disguise or with certain masks.For me this is another reference to the isolated position on the top and the inability to act freely, and further reason for the absence of fire near the Emperor.You will also notice that he doesn’t wear a crown. In malkuth the crown is a symbol for control over the elements and the chakras, but it has been used just too often in a wrong way, so I replaced it with an orphic egg to show the connection of the crown chakra with the controlled domain (quantum entanglement of the mind and the kingdom)Let me explain this. Really having a empire/ a domain/a realm under control or under sight means to transcend the consciousness into the crown chakra and really be the aura of the whole domain. It’s like expanding the own aura so much that the realm is comprised in it.Below the symbols work as well, just replace them with any historical patriarchal caste-system, economic giants of today or just any global leader.The comet escaping the cosmos symbolizes that one pattern in the cosmic matrix which an emperor can never control (Compare it to the anomalie/the son). It is the intervention of a higher power which eventually leads every structured domain into the chaos that must follow a stagnating order.I totally agree with the ram symbolism, but have some doubts if the path on the kabbalistic tree is the right one and have  for some time now. More study and practice is required to solve this mystery. After all I’m happy I don’t agree with everything we learn. Awakening wouldn’t be possible if we were not able to question what we receive.